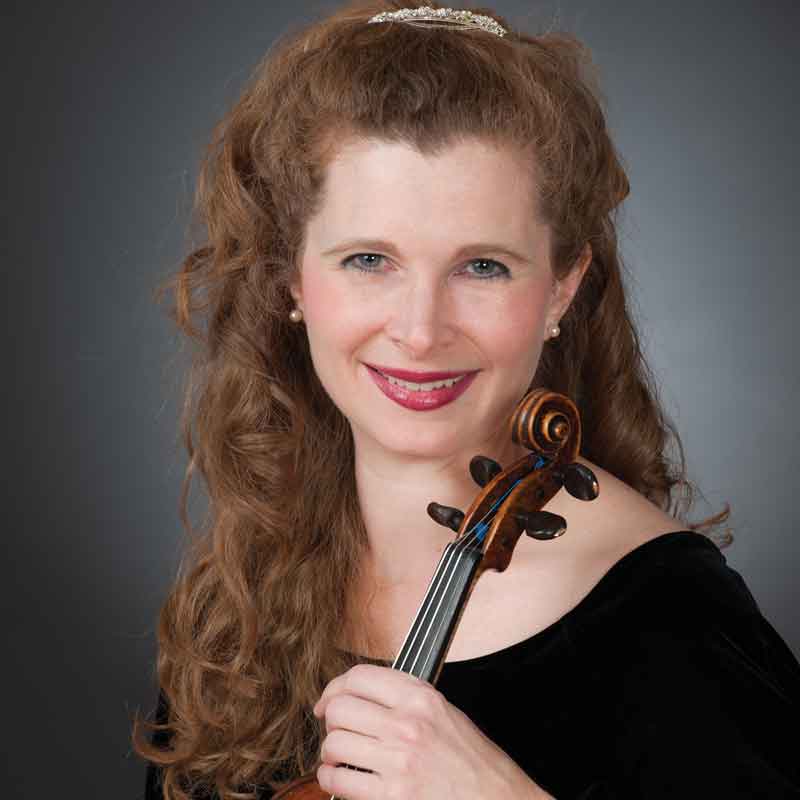 Violinist Susanna Perry Gilmore enjoys a multifaceted career as solo artist, chamber musician, and orchestral concertmaster. Performing on both modern and period instruments and versatile in diverse styles from classical to fiddling, she is hailed as a player who is both “thrilling and sensitive” by the Memphis Commercial Appeal, “luminous and hypnotic” by the Omaha World-Herald, and “authentic with exquisite good taste” and “rich in tone, bringing musical depth and a human touch” by the Cleveland Plain Dealer.

Ms. Gilmore frequently appears as a soloist with the Omaha Symphony on the Master Works, Joslyn, and Symphony Pops series. Recent performances include the Scottish Fantasy by Max Bruch and Celtic Journey: Magic of the Emerald Isle. In recent seasons Omaha audiences have heard Ms. Gilmore perform the Tzigane by Ravel, Berg’s Violin Concerto, Prokofiev’s Violin Concerto No. 1, Vivaldi’s Four Seasons, Mozart Violin Concerto No. 5, and the Korngold Violin Concerto as well as major concertmaster solos such as Rimsky Korsakov Scheherazade and Strauss Ein Heldenleben.

After beginning her career as a chamber player, at the age of twenty-six Ms. Gilmore became concertmaster of the Memphis Symphony Orchestra. She joined the Omaha Symphony as concertmaster in 2011. Since 2014 she has been a frequent soloist and co-concertmaster on baroque violin and fiddle with the acclaimed period instrument ensemble and Grammy Award winner Apollo’s Fire (Cleveland), with whom she tours nationally and internationally and appears on the CD Sugarloaf Mountain: An Appalachian Gathering (Billboard Top 10 classical bestseller), the CD Sephardic Journey: Wanderings of the Spanish Jews (Billboard Top 10 classical bestseller), and Christmas on Sugarloaf Mountain.

Ms. Gilmore holds a Bachelor’s degree from Oxford University (UK), where she studied musicology and performed both early music and symphonic repertoire while studying privately with Yfrah Neaman. She spent a post-graduate year in the Advanced Solo Studies Program at the Guildhall School of Music and Drama in London. Upon returning to the United States, she earned a Master’s in Violin Performance from the New England Conservatory, where she studied with James Buswell. Prior to her studies in England, Ms. Gilmore studied with Christian Teal at the Blair School of Music in the pre-college program and as a child began her violin studies with Mimi Zweig at Indiana University. Ms. Gilmore learned to play Celtic fiddle in her youth through sitting in on Irish sessions during her years living in Nashville and England.

When not working as a classical and baroque violinist and fiddler, Ms. Gilmore spends time with her two daughters, Katy and Zoe, and her husband, Viseslav Drincic. She performs on a 1776 Joseph Odoardi violin.