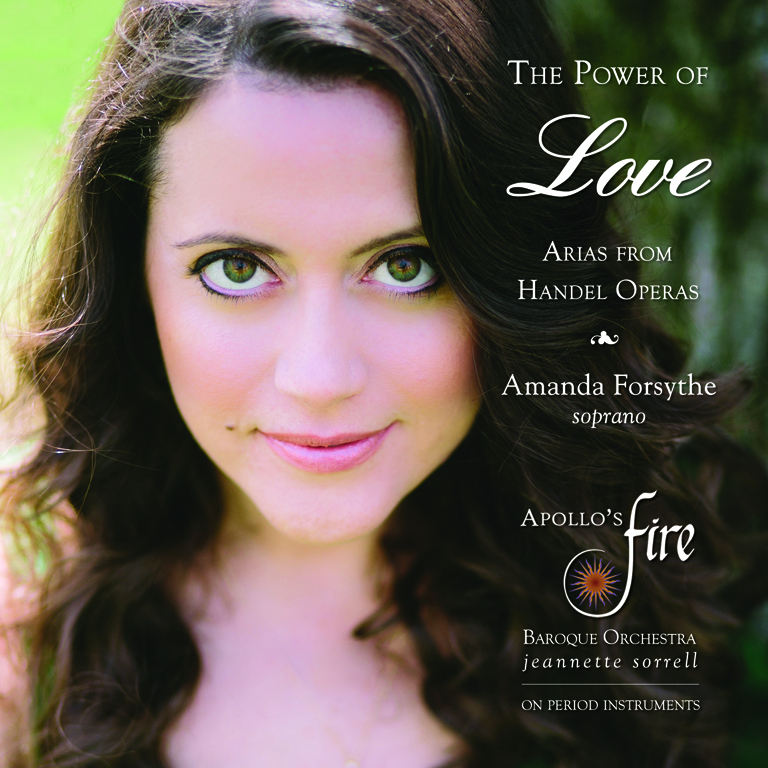 Renowned for its “expressive subtlety, exuberance and passion” (Classical Music Magazine, UK), Apollo’s Fire led by Jeannette Sorrell has been credited with “forging a vibrant, life-affirming approach to the re-making of early music” (BBC Magazine). Their commitment to personal, emotional communication finds the perfect match in soprano Amanda Forsythe, who has taken Covent Garden, the Rossini Festival in Pesaro and the Boston Early Music Festival by storm. Forsythe and Sorrell explore the passions of the Baroque in this program of love, angst and revenge, featuring luscious Handel arias from their forthcoming CD together, as well as fiery Vivaldi concertos. The program closes with Sorrell’s acclaimed arrangement of Vivaldi’s “La Folia” (Madness) which the ensemble performs from memory, and which has brought audiences to their feet at Madrid’s Royal Theatre, London’s Wigmore Hall, Bordeaux’s Grand Opera House, and concert halls throughout North America.

“Like the savviest old-time movie stars, Apollo’s Fire, directed by harpsichordist Jeannette Sorrell, knows how to cast itself in the best light. Its program in Cambridge was love-themed, with an emphasis on jealousy and madness… suiting the group’s extroverted style. The soloist — soprano Amanda Forsythe — has no small star power of her own. And throughout, the group doubled down on its best attribute, its sound: early-music straight-tone point polished to a ravishing, satiny gloss.” —The Boston Globe, 2015

“Known for its keen sense of ‘affect’ (emotion) in performances, Apollo’s Fire… offered a rich program of Handel and Vivaldi works. Led by Jeannette Sorrell, the Cleveland period ensemble is internationally renowned for its precision and stirring, even fiery, interpretations…. Soprano Amanda Forsythe possesses a jaw-dropping facility. She sang with a shimmering tone and a fine ear to the emotional content of the arias, fully capturing the fleeting excitement of first love to jealousy and madness. Throughout, the orchestra lent soft and dynamic support, playing with a silky smooth string tone. But the most remarkable… was the way that the ensemble shaped the musical phrases. Sorrell, conducting from the harpsichord, led with pulsing and waving gestures to coax lines that were quick and lively one moment and slow and mournful the next. Rhythms were buoyant and the works seemed to breathe naturally, resulting in music that truly came alive. That was most apparent in their performance of Vivaldi’s La Folia. The theme beamed from colorful dynamic shading, the forte passages ebbing away into sudden pianissimos… An approach that enabled Vivaldi’s work to sound anew.” –Boston Classical Review, 2015

“Apollo’s Fire put on a most effective show Friday night at a packed First Church in Cambridge. It is easy to see how the Apollo’s Fire approach to Baroque music has won it several Billboard awards. The carefully worked out rubatos and dynamics in the more expressive pieces, as well as the gutsy playing in quick movements, are executed with impressive unanimity…. A concert such as Friday night’s is a triumph not only for the soloist but for the contemporary marketing of so-called early music.” –Boston Musical Intelligencer, 2015

“The Apollo’s Fire concert at Cambridge’s First Church… was a total love fest. Forsythe, of course, elicited the major part of the affection, but she was matched by a totally compatible instrumental ensemble. Led by fiery-red head Sorrell… the group plays with rhythmic verve and passion. Tighten your seatbelts, ladies and gentlemen, this was going to be an exciting evening… By the end you half expected the stage to erupt in chaos…. “La Folia” led to what was for me the evening’s highlight, Handel’s great aria, “Piangerò la mia sorte” from “Giulio Cesare.” Forsythe takes it to… the highest level. Her personal and inventive ornamentations in the da capo repeat cement her artistry. Forsythe demonstrates with exquisite artistry…. With her rendition of “Piangerò,” she set a new standard. Fortunately, Apollo Fire made a recording that captures Forsythe at this peak moment of her career, which seems to be a hot item.” –Berkshire Fine Arts, 2015